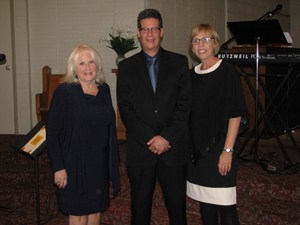 Growing up, I encountered quite a few paranormal events.  For example, I stayed at a haunted house in York, England where I had a very calm but full blown experience. I also witnessed the much publicized Phoenix Lights in Phoenix, Arizona first hand as I drove back from college in the evening in 1997. It’s hard to believe this year marks the 20th anniversary of the Phoenix Lights mass sighting.

Still, the experience that had the most spiritual impact on me occurred in London, Ontario almost four years ago. At that time I had repeatedly watched, Tim Coleman’s The Afterlife Investigation, but I still couldn’t believe that physical mediumship was real. There was no way those “mysteries of the universe” books I read as a kid showing pictures of ectoplasm, including the famous Katie King full materialization, were for real . . . so I had to find out for myself!

I quickly found out that not only was mediumship real, but it had been re-born in Rochester, New York, just a few hours drive south from London, Ontario where I lived. I couldn’t believe that North America had any significant spiritual heritage, let alone that it was the epicenter of it!

Reading all about the Society for Psychic Research (SPR) and the Spiritualist movement, I was delighted to find out that there was a Spiritualist Church in London, Ontario. I attended a couple of Sunday services, but was less than impressed – nice people, but where the heck was the ectoplasm? I dug a little deeper and found out that Rev. Carol Burrows, who leads the church, held a private seance night limited to 15 participants once a month.  I signed up immediately!

During the course of my research, I had discovered the importance of connecting to your spirit team leading up to a seance night. I meditated daily following Robin Foy’s advice of connecting to Universal Harmony every night before I fell asleep, as well as asking my departed loves one to join me at the appointed date and time. I felt quite “charged” by the time the night of the seance took place having had a full three weeks to prepare.

Palms up, and feet uncrossed (I had picked up a few tips about sitting in circle), I felt high from the energy in the room on that first night. I sat silently, monitoring my breathing, and waited patiently for my spirit guides to drop by and give me a message.

About half way through the evening Rev. Doug Eyre suddenly said,

“I have a male spirit here for you, Chris.”

I was terribly excited but tried to remain fairly calm, continuing to focus on my breathing while keeping my ego at bay. The Reverend said,

“I really like this spirit personality, he has a wonderful, warm energy and big presence! He is here with his hand outstretched to shake your hand, Chris.  He says he is surprised you are so open and that he never thought you were as open as he can now see you are.”

Wow, great start, but who the heck was this personality? The Reverend continued,

I felt my enthusiasm deflating as I thought,

But then I remembered to keep my ego at bay and stay open to the fact that Spirit’s perspective may be vastly greater than ours here on earth.  I responded,

“I was planning on replacing my patio stones this summer but it was just a plan in my head and nothing more. I have not started the project . . .”

“Hmm… he’s quite insistent about stone working, Chris. Are you sure you have no connection with stone working?”

“Other than this planned project I’m afraid not…”

I couldn’t believe it, such an early and clearly deliberate message, yet it seemed like a dud.  Maybe the Reverend picked the wrong person in the room. Maybe mediumship really was fraudulent . . .?

My reading concluded with some great information about a life choice I was in the process of making, and that it didn’t matter whether or not I picked one choice over the other; I would get to where I needed to be in life. That was nice to hear – this advice helped me make this major life choice with confidence.

Some days passed and I was wracking my brain about this stone worker thing when a memory came flooding back from my childhood – something I hadn’t thought of in over 15 years.

When I was about 14 my best friend and I were hanging out. All of sudden out of the blue, my friend turned to me and said,

“My last name, Steiner,  is Slovakian and means stone worker in English”.

I simply couldn’t believe it!

This friend of my mine’s father, George, and I had been quite close. In fact, he had been like a father figure to me and I had loved him. He had passed away tragically six months prior to this reading. George was kind and loving to many of my friend’s pals. He had a massive heart and a big, warm presence. The stone worker was George! He had come to say hello and I at last had the evidence I was seeking!

Thoughts flooded my head – could it be that my friend had been influenced by Spirit to tell me that information because it would be essential to my reading 15 years later? Is life written and unchangeable? Was it just a coincidence that the spirit personality’s gender, description, and private, evidential information fit perfectly with George? This was much bigger than I could have ever imagined. I was humbled.

A year passed but I needed more evidence so I attended a very special seance night with the London, Ontario Spiritualist church. Eight guests were invited to attend a table tipping seance, and I for the first time witnessed a table levitate, vibrate at an incredible rate, and literally buck around the room for almost three hours! At one point I watched it raise and lower to the ground when I was the only one in the room touching it – absolutely zero chance of fraud. It was a full light seance during the day and the table was made of plastic. There was no magnets, no strings, no tricks. I had finally witnessed the impossible with my own eyes.

Now as a full-fledged believer in the reality of Spirit, I live a fear-free life, a benefit that has liberated me to believe in myself in a way that would never have been possible without this knowledge. I am so grateful that I having learned of the greater reality and have so much more to learn and share with the wonderful team of like minded people at iDigitualMedium.